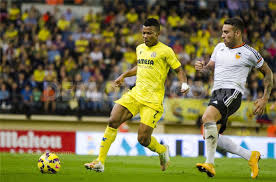 At the start of the season, respected Spanish football viewers and pundits were tipping Valencia, the away side, to struggle. Nobody, though, expected the club to then put in their worst ever start to a La Liga campaign. After 17 match days, the La Liga side sit without much to shout about at all.

They sit in 17th place, just about the drop zone, with more losses (9) then they have wins or draws combined (8). It’s a dire situation for one of the most storied sides in Spanish football, and to make matters worse they come up against a solid Villarreal side.

Villarreal have lost just one of their last six matches, and welcome their regional rivals at home with relish. While the likes of Alex Pato and Nicola Sansone have not been as impressive as hoped when they signed, both have still chipped in with a few goals. Sansone has 7, for example, and could be a key player for Villarreal in this match.

Other players such as Bruno and Roberto Soriano, Manu Trigueros and Mario, though, have have excellent seasons. A lack of solidity at the back as cost the home side from being further up the table, but their impressive qualities in front of goal has helped to shield some of those problems in the first place.

In terms of the teams, neither feel as if they are in a position to be shouting about anything. Villarreal are likely to be short from Rafael Borre, Denis Cheryshev, Mateo Musacchio and Roberto Soldado all being out – some of them long-term. Cedric Bakambu is also away this season with his international team, meaning yet another major loss for the home side.

With a solid record, though, Villarreal can count on other squad players to keep them solid, if not exciting. Valencia, though, cannot claim the same kind of positivity.

Overall, we cannot see anything other than a home win. Despite Voro, the best caretaker coach in the galaxy, being in charge of Valencia, we just cannot see anything from them that bodes well. A 2-1 win against Espanyol would have cheered some people around the club up, but not enough to make a tangible difference – this is a home win, it’s about as comfortable as it should be.

With just one of their last nine home games ended in defeat in La Liga, we feel confident in predicting another poor weekend for long-suffering Valencia fans. 3-1 Villarreal.