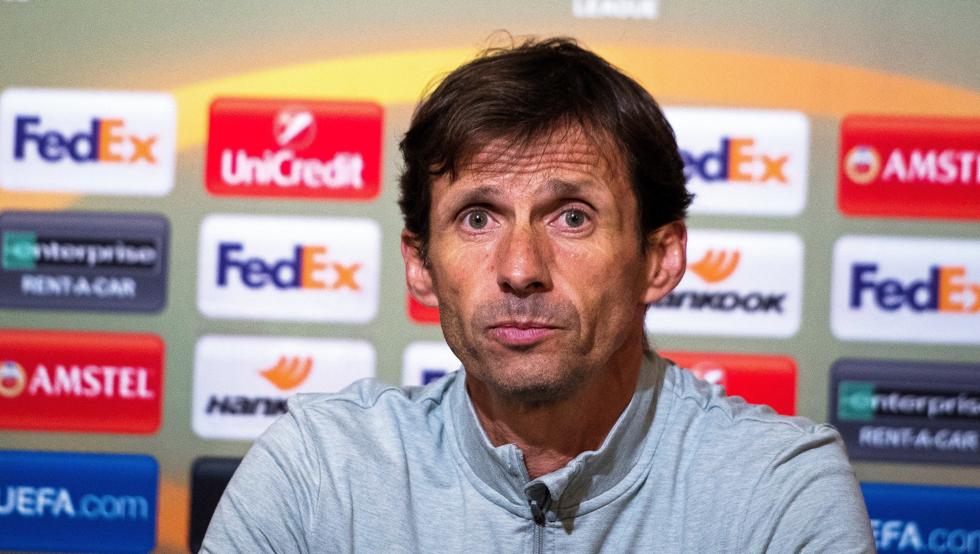 Kepa ensured that Athletic Club’s blushes were spared this weekend. One of the country’s best goalkeeping talents denied a penalty from Youssef En-Nesyri, but while the immediate sentiment was relief, a rather different mood had set in just half an hour later. Despite beating Malaga by a 2-1 scoreline at San Mames, the full-time whistle was met with more of its own kind, as opposed to applause, smiles and any sense of achievement regarding the three points Los Leones had so recently secured.

The issue hasn’t been results for Athletic for a long while, but rather the manner of their performances. At first in La Liga, Kuko Ziganda struggled to get his squad’s engine ticking over, but following a slow start their points tally crept up. An unbeaten run stretching between late November and February suggested that things were under control and manageable, but those very results can only seek to mislead those who haven’t been put through the enviable task of watching the Basque club’s demise this campaign.

Ernesto Valverde was always set to be a tough man to replace, especially given the slim pickings on the managerial market, but Ziganda has done little this season to suggest that Athletic should even consider giving him long-term control over a squad that he has vastly underachieved with in La Liga. While it is true that Los Leones generally kick on in the second half of league campaigns to achieve their European ambitions, there have been no signs of improvement over a long and arduous season so far.

Beñat was given some minutes in the heart of midfield against Malaga, with the diminutive playmaker everything that Athletic have been crying out for long term. Since a serious injury to Iker Muniain, technical ability has been thrown by the wayside in Bilbao, with Ziganda instead opting for more rough and ready, energetic midfield options. Rather than building patiently, long-ball tactics have meant that Aritz Aduriz and Raul Garcia are battering rams rather than mere focal points.

Not only has this stylistic decision made Athletic utterly unwatchable for the purists, but the stereotype and lasting impression of the short Ziganda era may well be a tough sell to more accomplished players. The Basque talent pool is shallow, with Mikel Merino snatched away to Newcastle last summer, while Ander Herrera’s contract at Manchester United ticks towards its expiration date. Currently, in terms of their style of play, these players would only be tempted to San Mames by the promise that their very arrival would usher in renewed hope.

After Valverde’s balanced and methodical approach, this Athletic side place more stock in percentages. Hopeful crosses into the penalty area from direct wingers are plentiful, with looking after the ball something that appears rather alien after months of negative reinforcement. Versus Girona, Los Leones looked to play with a three-man defence to gift themselves more control. Instead, it highlighted a tactical naivety from Ziganda that only allowed manager-of-the-year candidate Pablo Machin to raise his stock value further.

The problem is no longer whether Athletic are picking up victories, nor if they can stretch an unbeaten run to span over several months, but it is that the manner of their performances, in victory or defeat, is jarring. Their style has devolved to near-primitive levels, with no suggestions that Ziganda can inspire anything other than grit from his squad. His players will battle for him, just as they would for any other coach who has earned his keep for years within Lezama, but it isn’t enough.

Athletic may have scraped their way into the next round of the Europa League, with a very fortunate first half an hour of their first-leg clash against Spartak Moscow helping their cause no end, but their run in Europe should also transpire to be the same duration as Ziganda’s tenure at the club’s helm. The home fans have only witnessed Atletico Madrid and Barcelona take all three points from San Mames this campaign, and yet they have already grown tired of the situation, with Valverde’s departure ushering in something of a medieval era.

Ziganda earned his chance to manage Athletic, and deserves the opportunity to step back into the shadows at Lezama once again. The first-team squad, however, owe their fans a far-improved brand of football. One that promises for more than four passes to be strung together, one where their team are as comfortable defending in possession as they are without it. Aritz Aduriz’s retirement looms in the next couple of years, and Athletic have never looked as ill-prepared for an eventuality in which they don’t have one of the division’s best target men on their books.

The idea of promoting from within is certainly an attractive one in football, with such a managerial appointment inevitably bringing with it an added sense of loyalty and trust. Ziganda has been given his opportunity to dine at Spain’s highest table, but after 25 match days his coaching style and team’s identity are just as clouded and basic as his very first game in charge. Coaching casualties are never a savoury topic, but there has to be the realisation that some situations just don’t work out.

New deals have been signed since Ziganda’s appointment, with Williams, Kepa, Aduriz and Inigo Lekue pledging their long-term futures to the club. All is certainly not lost, but there needs to be a re-think at the top if Athletic are going to remerge gracefully next season after a campaign that would thus far be easier to forget.