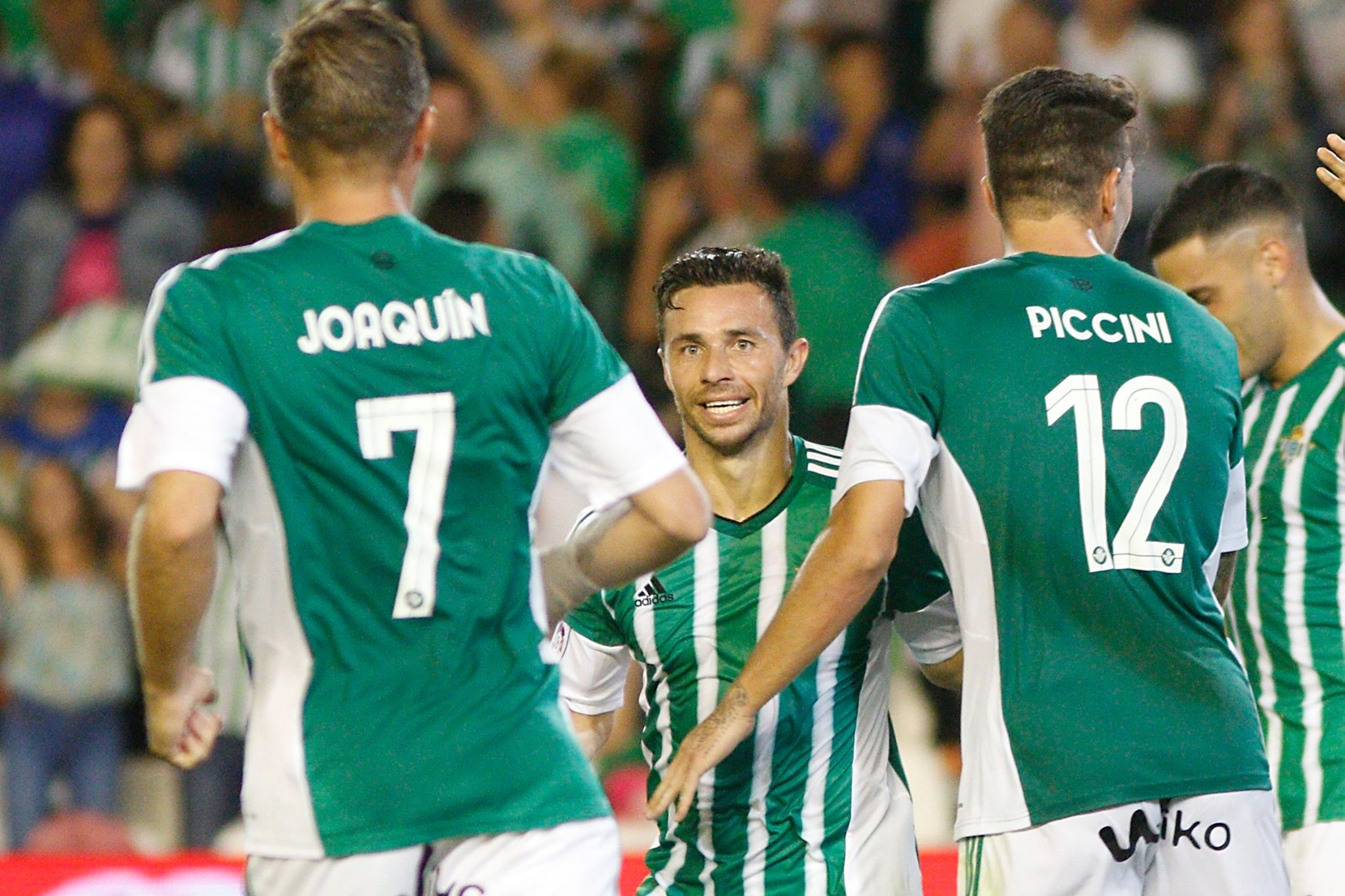 By admin
Posted April 18, 2018
In Match Previews
0
0
There were always signs that Quique Setien’s Real Betis were capable of something special. Earlier in the season, a win against Real Madrid was an upset in itself, but it was the composed manner in which they went about their task which made it all the more impressive. Yes, they could press and play with intensity while looking to disrupt their opponents, but with the ball they were just as neat and purposeful.
For all of Betis’ bright sparks, leaking goals was the sacrifice that they were willing to make. For the first half of the campaign, their entertainment value was not channelled into a one-sided narrative, but instead Setien’s style left his defence susceptible to being exposed. Promoting risk would not always come hand in hand with reward.
While the renaissance of Joaquin allowed for the 36-year-old forward to be the poster boy of Setien’s attack, with the experienced wide man given plenty of liberty to either keep his width or come infield to help find space between the lines, a different figure has breathed new life into Betis since the turn of the year. Joaquin is part of the furniture at the club, with his spirit held just as dear as his footballing ability, but a man newly introduced to the group has had a huge impact.
Marc Bartra left Barcelona with a point to prove at Borussia Dortmund, but in January the time was right to return to Spain. Betis were characterised by their desire to attack, get forward and be positive in their use of the ball, and yet their best signing of the campaign has proven to come in the form of a central defender. The project itself has been ambitious since the summer, with money spent, and managing to attract a name such as Bartra’s shows their upward trajectory.
The Spaniard has seen Betis take eight wins from his first 11 matches, with his presence helping to usher in a new era of balance alongside a few tactical tweaks from Setien. Starting either in a back three or four as a central defender, Bartra has been excellent on the defensive side of things, while also having the capacity to step out with possession with confidence.
Only six games remain in LaLiga, with Betis sitting comfortably in fifth place with a four-point lead over sixth-placed Villarreal. Their local rivals Sevilla are in free fall in seventh, and must still pay the Benito Villamarin a visit between now and the end of the campaign. A narrow 1-0 victory over Girona most recently, the Catalans’ first defeat at Montilivi since December, secured their fifth consecutive win in the league and continues to add fuel to the fire.
Bartra has helped to oversee a defensive reshuffle, with Betis managing to keep clean sheets against Girona, Eibar, Getafe, Espanyol, Real Sociedad, Levante and Deportivo in 2018. From a running joke in the division in terms of their gung-ho style and stubbornness in their approach, they have evolved into a much more balanced and methodical machine in recent months.
“We have tweaked our tactics without losing our identity,” Setien explained recently to BeIN Sports. “There have been many matches where we are now more patient, waiting for spaces to open up and we’re thinking more.”
By often using wing backs, with the home-grown likes of Junior and Francis getting plenty of opportunities out wide, and deploying either three central defenders or a deep midfielder that can drop into a stretched back four, Betis are getting the best of both worlds. They have plenty of options for playing through midfield, as well as the width to permit Joaquin and Ryad Boudebouz to flit infield and act on instinct.
The pitch is opened up, with players such as Fabian Ruiz, Andres Guardado and Javi Garcia having the composure to pick their moments to either recycle possession or break opposition lines. Fabian will often drop out to the right-hand side to collect the ball from deep, while Guardado knits everything together in the centre of the park.
Sergio Leon, Antonio Sanabria and Loren Moron all have the desire, work rate and movement to cause problems in behind, as well as the engines to lead from the front in terms of pressing. From appearing vulnerable and one-dimensional, Betis now have real depth and options to choose from, but the figures of Joaquin and Bartra are not negotiable. The former embodies what it means to be Betis, while the latter is well on his way to personifying the positive change and progress at the club out on the pitch.
One arrived a mere few months ago, while the other has grown up loving the club, and yet the pair share the same short-term aim: European football. While teams such as Sevilla, Girona Eibar and Villarreal have stuttered in recent weeks and fallen away somewhat, Betis just keep on winning, home or away.
By Simon Harrison