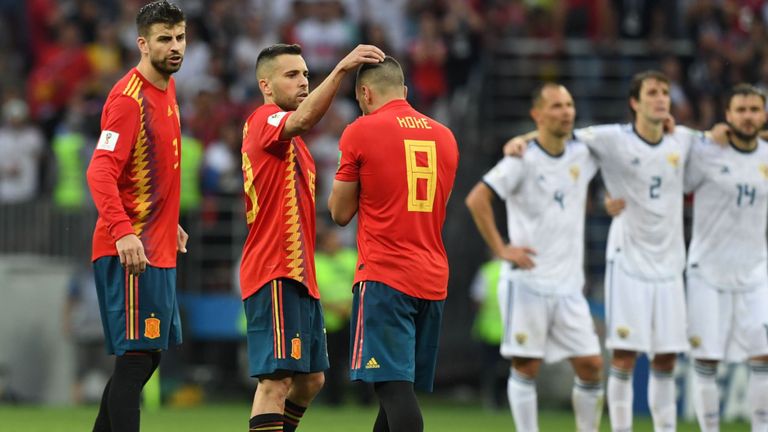 La Roja’s elimination from the 2018 World Cup was, unfortunately, not a surprise. The toe of Igor Akinfeev secured the upset for host nation Russia, in the wake of 120 minutes of stale football and a penalty shootout at the Luzhniki, but the writing had been on the wall long before. Arguably, it had been on the wall since before the tournament had even began.

Mistakes were rife, with several players guilty of underperforming or uncharacteristic lapses of concentration. On the day of their elimination, it had been a naive handball from Gerard Pique that gave away a penalty, but Sergio Ramos and Andres Iniesta had jeopardised La Roja’s progression in their final group game against Morocco, with rash fouls in their tournament opener versus Portugal also helping Cristiano Ronaldo to score from both the spot and a free kick.

Criticism has rained down upon goalkeeper David de Gea, as well as the supposed ‘tiki-taka’ style that saw Spain run out of ideas and endlessly rotate in a stupor before being knocked out on Sunday. That game didn’t bear witness to tiki-taka football, nor had that been the direction of La Roja prior to Julen Lopetegui’s sacking two days prior to the country getting their World Cup campaign underway. What Russia managed to take advantage of impressively was a group that was mentally shot at, utterly directionless and without a figurehead to look to.

Back in Spain, sections of the media have been quick to blame RFEF president Luis Rubiales. But for the ego of the federation, they suppose, Lopetegui would have had the chance to guide this talented squad with whom he had spent two years preparing for this very competition.

To flip that on its head, a national coach shouldn’t be privately sniffing around for other jobs and allow his own personal affairs to come out in the open in ill-timed fashion. “The logical thing would have been to continue with a coach that hadn’t been beaten in 20 games,” LFP president Javier Tebas announced on national radio, but that wilfully ignores the scenario that provoked Rubiales and the federation into sadly necessary action.

“Instability is never a good teammate,” Sergio Ramos reasoned in the aftermath, and for that there is only one place to look. Lopetegui’s agreement with Real Madrid going public was the first Jenga piece pulled out from La Roja’s foundations, the jolt that encourages the avalanche. The federation can be criticised for acting in the heat of the moment, but the only outcome from the situation had to be a cold-hearted dismissal of Lopetegui. Without making an example of unprofessional behaviour, the RFEF could be considered as nothing more than a joke, an entity to be walked all over and left out of any further decisions in the future.

Fernando Hierro had been thrown into an awkward situation under heavy pressure, but making big decisions or changes would be made ever-harder by the incredible powerful microscope that every move and mistake was put under.

Throughout the competition in its entirety, Hierro was frightened to rock the boat or make any radical changes in-game, with Spain under-21 coach Albert Celades offering little else on the bench alongside Spain’s supposed figurehead. Lopetegui’s primary blueprint was stuck to, perhaps too rigidly, with a set of coaching staff that didn’t tweak or act on instinct as frustrating, narrow games continued to play out in front of their very eyes.

Lopetegui’s system offered a platform for control, but without his presence Spain could only promise stale possession. Isco tried his best to lead by example and was heavily involved, but cutting edge was lacking all over the field. Diego Costa dug his country out of trouble in the opening group game against Portugal, with other explosive forward options such as Rodrigo and Iago Aspas not getting the minutes that they were deserving of.

Before heading to Russia, a two-man striking partnership was the go-to way to combat a deep block, but instead Spain struggled on with Costa alone for 80 minutes before a change on Sunday. When Iago Aspas stripped off and was ready to come on, it was Costa who then made way, leaving Aspas in the same lonely situation up top, afraid to pull wide or improvise for fear of leaving the team toothless centrally.

Some changes had been rung for that particular game. Koke was finally introduced into a midfield that had been crying out for his energy, but his deployment firmly alongside Sergio Busquets at the base of proceedings saw him put in an almost entirely arbitrary performance. This was a player that led the press in pre-tournament friendlies and helped to hunt for possession, reduced to a needless water carrier in a match which didn’t need two holding midfielders present for 120 minutes.

Andres Iniesta and Dani Carvajal were two players to fall from Hierro’s starting eleven against Morocco, but after 70 minutes against Russia they were introduced back onto the field in like-for-like fashion. When Spain were struggling to even escape their group, it similarly took over 70 minutes for Hierro to ring the changes. At the Luzhniki his first two changes simply reverted back to another version of Plan A that had been proven to struggle. Ultimately, the job was too big for Hierro, but it wasn’t a role that he had signed up for.

The fingers pointing has begun, with plenty of easy scapegoats to be held up and criticised roundly. While the Lopetegui fiasco can be blamed, and individual mistakes replayed time and time again on television, the sad truth is that a fantastic, talented generation has been wasted, at least for a couple of years.

The squad was there, as was the system, but sending an army into battle without their leader will rarely end well. Rubiales gets to continue his RFEF project and Lopetegui prepares for his dream job at Real Madrid, but neither will shake the demons of this World Cup for a while yet.