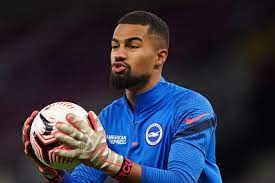 Hailed as one of the most fertile nations in the world for footballing talent, Spain sure knows how to produce them. Intriguingly, the latest La Roja squad is loaded with a series of interesting young talents who had so far not made a senior appearance for the national side.

As Luis Enrique looks to give the next generation a fair shot, three names, in particular, are gaining a lot of interest in the national team. They are Pedri, Pedro Porro, and Robert Sanchez.

Who is Robert Sanchez?

The latter name is the most interesting, though, as it shows how close David de Gea is to losing his position as the Spain no.1 goalkeeper. The Manchester United goalkeeper has become error-prone and sloppy, and coach Enrique is known to be considering moving to a new option. The name who has been called up with the latest batch of Spain players, then, is Sanchez.

Sanchez has been brought in to the national side after excelling for Brighton & Hove Albion. He even has a good shot at making sure that the other alternative, Unai Simon, is pushed aside. With an incredible save record approaching 75%, Sanchez has been linked with major clubs in England and Spain.

Who is Pedro Porro?

The other name gaining a lot of intrigues is Pedro Porro. The full-back had played his football in Spain and in England, with his career starting at Peralada before making a move to Girona. There, he impressed enough to be signed by Manchester City before being loaned out to Real Valladolid. Despite impressing at times in La Liga, a move to Portugal was arranged and he signed for Sporting Clube de Portugal.

Since then, he has marked himself as one of the best full-backs in the Liga NOS, making regular passes and assists. His rampaging runs have been a key reason why Sporting are 10-clear at the top, and look set to end a league title drought that has lasted for close to twenty years.

He will be given a chance to impress in the senior side in this upcoming international break – and to remind Pep Guardiola of his outstanding quality.

The biggest name on the list is one of the reasons why Lionel Messi might stick around at FC Barcelona. Pedri has been introduced into the first-team this year by Ronald Koeman and has become almost undroppable. Playing with confidence and a swagger that would be associated with a 50-cap plus international, Pedri looks like the ideal player to build around at both club and international level.

Since Xavi and Andres Iniesta called it a day, the national side has lost the ability to regularly call upon a player like Pedri. He offers the kind of ball-playing ability that simply does not exist within much of the rest of the Spain squad. Without a doubt, he is one of the most exciting players in the world – and this could be his first cap of many.