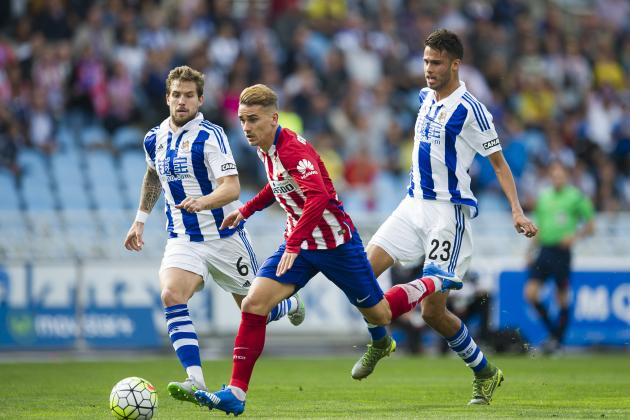 As one of the games on the La Liga calendar that tends to catch the eye, Real Sociedad welcome Atletico Madrid to the Basque region. In a match that tends to be pretty fiery, and with the return of Antoine Griezmann, the club who made him, it’s going to be pretty interesting to see where this match goes.

The home side is currently an impressive 7th in La Liga, and are playing some pretty decent football. Even though they are missing talented players like Geronimo Rulli, Esteban Granero, Inigo Martinez and Imanol Agirretxe, the club is still making solid progress. Assier Illaramendi looks his pre-Madrid self, and other payers such as Yuri and Zurutuza on the left side are making big impressions.

It’s expected that Sociedad will come into this with a similar lineup to the one they have used recently, with only injuries forcing the hand of the team. Mikel Gonzalez and Raul Navas are likely to be the ones charged with keeping the awesome Griezmann quiet. Good luck with that one, lads!

Meanwhile, the away side swagger into town after a midweek draw against Rostov in the Champions League. Even with that in mind, and with people like Koke, Stefan Savic, Nico Gaitan and Jose Gimenez all absent, Atletico will be confident of leaving here with all three points. Having lost just one of their last seven visits, the Mattress Makers are well on the right track this season – and are visiting a foe that they enjoy playing against.

Both sides are finding goals this year. Willian Jose is top scorer for the Basques with 5, whereas Gameiro and Carrasco for Atletico have the same tally. Only Griezmann can beat that with 6 so far in the season. The boys are flying, with Diego Godin and Felipe Luis making the defence tick once again.

Although you always tend to look to the home side and favour them due to home advantage, it’s hard to ever discount a Cholo Simeone side in a tight league match like this. Whilst Sociedad are on a two match winning streak, Atletico back themselves against anyone. Having lost 1-0 at Sevilla in their latest match, too, they will want to get back into full fighting contention for the title.

To do so, however, would mean scoring at a team who keep clean sheets – two in their last two home matches especially. Socieded have also scored 8 goals in their four previous games, showing you just how strong at home they are.

We expect a bit of a barn-burner here. Atletico need the win but Sociedad are a chillingly tough opponent at home. Add in the fact that Atleti are just coming off a tough CL game and it could be a game too far for them.

However, we are backing the away side (just). Sociedad to take the lead and Atletico to show their warrior spirit and to come back. It’s their main power under Simeone, and we expect to see it in action again here.