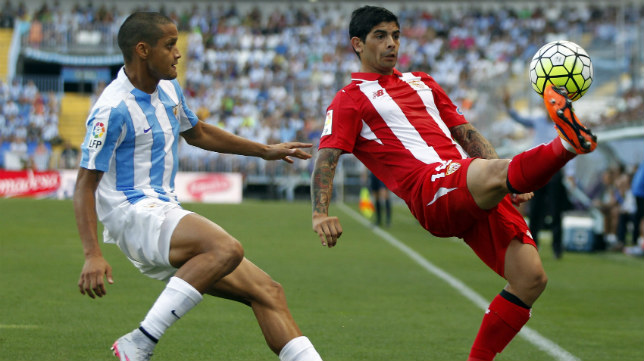 For large parts of this season, Sevilla have been one of the most exciting sides to watch. Malaga, meanwhile, are rather dour and basic – they offer little of the electricity that you get at the Sanchez Pizjuan.

However, this could change this weekend as Sevilla host their neighbours in the hope of charging them up – and frying them.

This Andalusian derby is important within the context of the season for both clubs. Win for Sevilla, and they can begin to look at potentially staying involved in the title race for a little longer. Lose, though, and they will likely see any hopes of a league title fully extinguished. Sevilla have a fantastic side, with the likes of Vitolo and Franco Vazquez being some of the most exciting attacking players in the country.

Also, they bring an interesting verve to the pitch through an energetic and attacking midfield. Steven N’Zonzi is one player who impresses massively, with links to the likes of Juventus not going away, while the ‘Spanish Fellaini’ Vicente Iborra got his season well underway with a fantastic hat-trick last time out.

Malaga, meanwhile, are relying on the destructive prowess of Ignacio Camacho, a player far deserving of a bigger move (perhaps back home to Atletico as a replacement for the ailing Tiago and Gabi?) as well as Roberto Rosales and Pablo Fornals. The trio are arguably the best players at the club, although the goals of Sandro Ramirez (6) are deeply important to the clubs’ current position of 12th. Malaga come into this with just one loss in their last six, knowing they are on a good run of form. Sevilla, meanwhile, have won merely three of that same period of games.

Interestingly, for all the plaudits that Sevilla are getting – and their lofty league position – there is not much between the sides in the way of goals. Sevilla have 28 to Malaga’s 24, showing that both sides are capable of finding the net. However, it’s at the back where both struggle, with 20 and 22 conceded. However, you would not expect two teams with such similar records in terms of goals for/against to be so far apart in the league – 9 points separate the duo.

That’s why this is hard to call. Malaga are in good form and arrive with a pretty strong record generally, alongside a Sevilla side who are flying high but aren’t exactly blowing teams away as you might expect.

Sevilla are finally, though, keeping clean sheets and that could do them the world of good in this match. Back-to-back clean sheets are rare for a Sampaoli side, and we don’t expect that to remain here. Sevilla are missing several first-team defenders, and it could be one down too many this weekend.

Malaga, though, bring ex-Sevilla hero Juande Ramos back to the stadium that he arguably knows best. We expect that this will be a feisty encounter, with goals in it. However, we’re going to call this an exciting score draw.