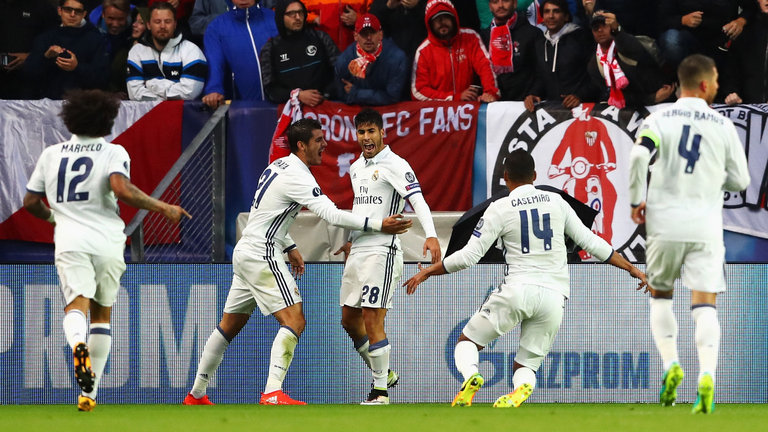 This weekend, Los Blancos could take a massive step towards a La Liga crown that has evaded them for too long. However, it’s quite ironic that they team they will likely beat this weekend, Sevilla, were supposed to be title rivals. After an incredible first half to the season, problems with the coach, injuries, a loss of form and fitness have all contributed to an altogether gutting Sevilla collapse. Therefore, this weekend, Madrid could put the decisive questions about their suitability to be champions to bed with a win here.

For the away side, the missing of some important players is likely to contribute to their inability to succeed. With the likes of Pablo Sarabia, Mariano and Vicente Iborra all out for Sevilla, it would be a massive surprise to see them claim a victory at the Bernabeu – and essentially hand Barcelona the league – without such key players.

For Madrid, though, it’s likely that their freshness is going to hampered by midweek. A challenging away loss at Atletico in the Champions League might deplete energy levels a little across the team. However, in terms of injuries, things are relatively rosy. We’ll likely see Nacho and Danilo come back into the side for the right-back spot, with the other likely to sit on the bench while Dani Carvajal recovers.

Isco is likely to continue after his all-important goal at the Vicente Calderon, with Karim Benzema also likely to maintain his place after a classic display in the away leg. Ronaldo is expected to play, too, while he’s been rested quite a lot recently. Therefore, with such firepower and a settle defence, it’s hard to see anything other than a pretty steady win for the home side in this one.

Joaquin Correa is likely to play for Sevilla, replacing Pablo Sarabia after missing a game through suspension himself. Given he’s in a side that has not won in five away games at league level, though, it would be tough to see anything other than a home win is likely.

Madrid have lost one game out of their last thirteen in the league, and arrive here knowing that this is one of their last major hurdles to claiming that league title once and for all. However, with a poor run of form at home (despite not losing) there’s always the chance a hangover could see them mess up once again.

This game, though, feels like it will be decided by the inadequacy of Sevilla rather than anything special that Madrid do. 3-1 Madrid.