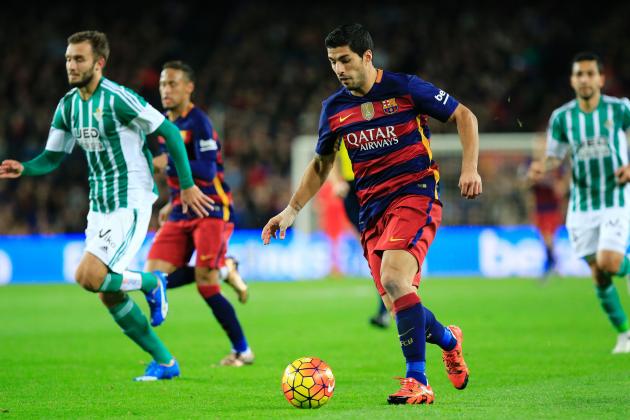 Say it quietly, but this could be the weekend where the title race takes on a whole new look and feel. Real Betis take on an impressive Barcelona side at home, where they know points are needed. With just two wins in their last six, Betis feel out of sorts. Barcelona are coming into this with a decent unbeaten run, albeit with too many frustrating draws thrown in, and should feel confident about making a difference.

They bring an extensive level of attacking quality to the table, with the MSN trio creating havoc for any defence. With Betis struggling at the back a little, having lost nine games already, it would be no surprise to see Barca take them to the cleaners.

Add in the fact that the likes of Darko Brasanac, Joaquin, Antonio Sanabria, Felipe Gutierrez and Jose Carlos are likely to miss out, too, and Betis soon look rather depleted in the most common sense. It’s hoped that Aissa Mandi can return to the squad following an early AFCON exit with Algeria. Also, Jonas Martin will likely miss out as Ruben Pardo may come into the midfield to make his debut.

A promising young midfielder, Pardo lost his way a little at Sociedad and a loan to the Andalusian side might be just what he is needed. Up top, we expect to see Alex Algeria return to the side and offer a bit of hustle. For Barcelona, things feel a little bit more straightforward however.

Javier Masherano is likely to return to the team, while Sergio Busquets is out. Ivan Rakitic should take back his position as the deep-lying playmaker, coming in to fill in the role of the big Spaniard. Sergi Roberto is likely to miss out, too, with Aleix Vidal given a chance to play at right-back. Having only recently started to get a game at the club, Vidal will need to use this opportunity to show everyone what he can do.

Andre Gomes should return to the midfield, too, with Samuel Umtiti – another summer signing – most likely to stay in the middle of the park with him, too.

The fact that Betis are unbeaten coming into this in their last five home games is a cause for optimism for the home side, for sure. They have even kept four clean sheets in that time period, shown that the Villamarin is beginning to become a bit of a fortress like old times.

Betis are looking to respond following a brutal 6-2 loss at the Nou Camp, as well. With a huge amount of change since then, not least the coach, the home side will be hoping to avoid anything like a repeat of the away fixture.

However, with 18 goals in their last five matches, Barcelona are back to their haunting best. This could see them continue that run of form, and it would be no surprise; as one of the best sides in Europe, they usually win when they turn up. A comfortable Barcelona win, for us.