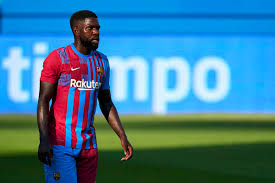 Having once been a bedrock of a defensive unit that won many titles, Samuel Umtiti has endured a real fall from grace. The France international has rarely been a regular at club or international level for several season now. With the player agreeing a contract extension with Barcelona purely to spread his large salary over a longer term to allow for more signings, Umtiti now looks set to move on from Barca permanently.

The defender has been linked with several clubs in his native France. One club that has long been linked with Umtiti is former club Olympique Lyonnais. Keen to add some defensive wisdom to their backline, Lyon could return for one of their favourite sons and bring him back home. Interestingly and more controversially, though, would be a move to Olympique Marseille. OM are keen to bring in more experience ahead of their likely return to the UEFA Champions League spots.

Umtiti would offer a player with winning experience and pedigree, though his lack of fitness and form for the last three-plus years could be concerning. With such tight budgets at both OL and OM, though, it might be hard for either club to squeeze Umtiti in. His potentially large salary might be hard to justify if the player cannot get on the pitch and/or find form when playing.

Another club that might offer more opportunity, though, would be Nice. The French giants have been empowered by the ownership of chemical firm INEOS, and have significant financial backing. They are also coached by Christophe Galtier, one of the best coaches in Ligue 1. With good financial backing, European football to offer, and the opportunity to live in a paradisial location, Nice could be winners.

They also could likely use Umtiti the most. They have an ageing defensive unit, and could need someone in their prime years to replace Dante in the long-term. Nice also offer an ambitious project that has strong financial backing. Unlike OM or OL, they have the means and they also have the essential need for a player just like Umtiti.

Galtier has often thrived when he has experienced players who can play his very specific system. Umtiti would offer a tactical intelligence and expertise that would make him almost perfect to add to the line-up. For that reason, there should be plenty on enthusiasm at Nice that Umtiti could solve one of their most pressing needs.

Though they might not be as big a club as either Marseille or Lyon, Nice are a big club with a unique history. Throw in their excellent current project, and they might finally have a leg over their two more illustrious rivals in landing a marquee signing.

Umtiti looks almost certain to leave Barcelona this summer. Whether he turns up in Lyon, in Marseille, or in Nice, though, is a guess at the moment. What is very likely, though, is that Umtiti will be on a Ligue 1 team sheet in 2022-23.