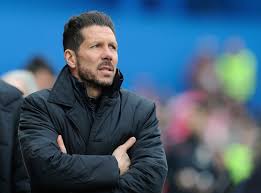 Having knocked two years off of his contract and essentially told everyone he’s going to manage Internazionale in the future, it was pretty safe to assume that the days of Cholo Simeone as the Atletico boss were coming to an end. As one of the most impressive stories on the European calendar in recent seasons, to see the man who has revived one of Europe’s finest football clubs move on would be a sad thing indeed.

However, romantics need not worry – at least according to what the man himself recently said. When speaking to the Spanish sports daily, Marca, Simeone was far more optimistic about the potential for hanging around in Madrid.

“It will be difficult to find a better team than Atletico in my future as a coach. So why not remain linked to a club I love?

“I have possibly found my place in the world, we will see,” he then stated, probably sending Atleti hearts into flutters. Despite the relative struggles of this season, you would be hard-pressed to find an Atletico fan willing to give up on the project. Simeone saved the club, and he’s more than earned his right to a consolidation season.

It sounds like he’s perhaps looking at it from this angle, too. With the fear that the fire was gone and the excitement was burning out, Simeone seemed set to move on having achieved all he could. Two failed Champions League finals, a Europa League, a Copa del Rey and a Spanish title are some of the most impressive feats in recent Spanish football history. To bow out on such a fantastic record would not be an embarrassment at all.

However, it sounds like Simeone fancies another couple of seasons at the club. He’s been there since 2011 and in that time has established himself as one of the premium managers in the European game. From a failure at clubs like Racing Club and River Plate to one of the best in the game, his journey from the bottom of management to the top has been a wonderfully impressive thing to see.

Therefore, it’s nice to imagine that he might stick around a little longer. The idea of him restoring Inter is a fine image, but so is the idea of more trophies going to sides in Spain that aren’t Real Madrid of Barcelona. Simeone, for a time, has helped to make that a reality rather than a hope, so let’s hope that he sticks around a little while longer.