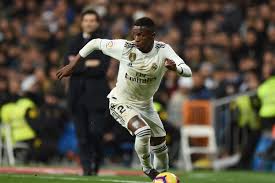 When Real Madrid signed Flamengo wonderkid Vinicius Junior in 2017, the hope was that the youngster would blossom into the ‘new Neymar’. Signing him for the Brazilian giants long ahead of time, he only arrived at the Bernabeu at the start of 2018/19. While he endured a tough first season, making just nine starts in the league, he did impress in some appearances with a pair of goals.

Seen as one of the most exciting talents of his generation, Junior managed to make a massive impression in Brazil and has long been a standout at youth international level. So much so that Madrid, in their desperation to sign Neymar, were reported to have offered the Brazilian starlet to Paris Saint-Germain as part of a players-plus-cash deal.

However, it’s instead being reported that that the Parisians have not been offered the youngster in exchange. Madrid have full faith that Vinicius Junior will fulfil his potential in Spain, with Madrid supremo Florentino Perez in no mind to shift over one of the brightest young talents in the world.

Madrid have a cadre of exciting young talent, with the former Flamengo starlet chief among them. To move him on – even for a player like Neymar – would represent a massive risk for any club. The fee paid for Vinicius and the early nature of his signing means that it would be more prudent for Madrid to wait and see how he develops rather than risk a quick sale.

For Vinicius himself, the move to Paris would have made some sense. Now, though, he can concentrate on making a meaningful impression in Spain as Madrid look to get back to serious winning ways.