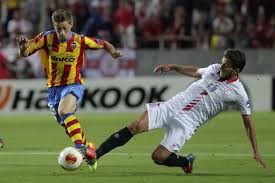 Two of the most confused clubs in Spain this weekend take each other on. Valencia know that, now sitting in 12th, they are probably clear of relegation after three wins on the spin. Sevilla, despite being comfortably seated in 4th, are in flux. A single win in six leaves the club looking at the direction it has taken this season, with rumours abound that Jorge Sampaoli is going to leave and take on the Argentina national team job.

That would be a huge blow for a Sevilla side that just two months ago was looking at a title challenge and a potential Champions League run. Sadly, this failed to be the case and instead we’ve witnessed Sevilla enjoy the most spectacular of collapses.

They come into this weekend’s game, then, knowing that they need a win at a resurgent Valencia to get their season back on track. The goals are drying up, and the defence is creaking. Out of all the times to play Los Che, too, this is arguably the worst. Valencia are – for the first time this season – in fine form. They have lost just two in six, and have no relegation concerns anymore. As such, they can play with a freedom and a flair that they looked incapable of in the past.

While the likes of Simone Zaza and Fabian Orellana have not really worked out as signings, other plays such as Enzo Perez, Dani Parejo and Joao Cancelo are beginning to remind people why they were so highly rated once. The consistent playtime of the youngster Carlos Soler is important, too, as he could be part of an interesting Valencia future

The loss of Jose Gaya is a miss for the club, though. The young full-back is going to miss this one out most likely, meaning that Lato is likely to return to left-back for this one. The away side, though, have far more worries in terms of injuries.

Adil Rami and Samir Nasri will definitely miss out, as well as Matias Kranevitter for suspension. As such, they turn into this game knowing that many of their performers across the season are injured, out of form, or unavailable otherwise. It’s likely that we’ll see a return to a 4-4-2 for the away side, then, with Stefan Jovetic and Joaquin Correa making the difference up top, if allowed.

We’re going to call this one as a home win. Valencia are finally looking a bit more solid as a team, and another win would put them thinking of a higher finish in the table than they probably expected. With 9 goals in their last 3 games, they’ve started to showcase a firepower that was once lacking.

Sevilla have gone the other way, meaning that – as form shows – Valencia have to be favourites for what is a deeply challenging game.