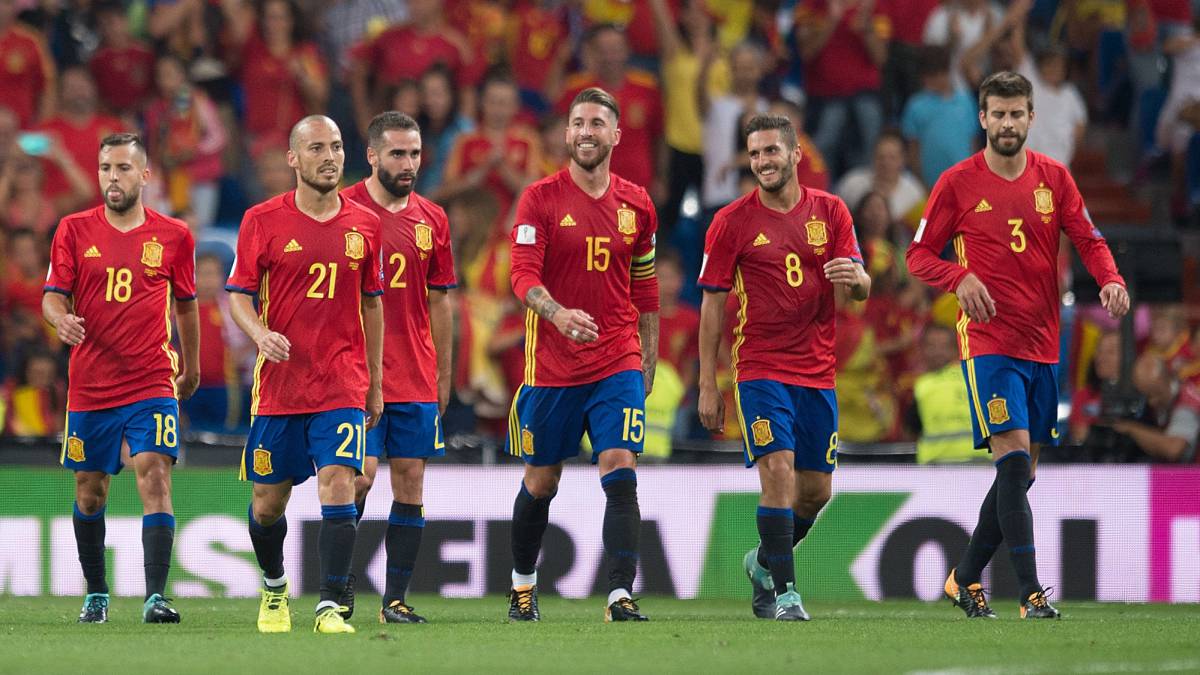 Spain have had the chance to ask plenty of questions of themselves during their two friendlies in preparation for the World Cup, with a 1-1 draw with Switzerland then followed up by a late 1-0 victory versus Tunisia. After La Roja’s fairly recent thrashing of Argentina, it was easy to paint a picture that saw them head to Russia as favourites, but there are certainly a few issues to still iron out.

Dani Carvajal’s injury has left the door open at right back for Alvaro Odriozola and Nacho to prove their credentials, with both Thiago and Koke having the opportunities to show why one of their number should be given the nod alongside Sergio Busquets and Andres Iniesta in central midfield.  Diego Costa, Iago Aspas and Rodrigo Moreno have all been given a fair crack of the whip to try and nail down their respective place in attack, but there is still an air of unpredictability in terms of the eleven men that will take to the field when Spain open up their World Cup campaign.

Julen Lopetegui’s half-time changes in Krasnodar highlighted the contrasting options that he sees as being Plan A and B. Alvaro Odriozola started at right back, with Thiago situated alongside Sergio Busquets in central midfield. Isco was deployed out on the left wing, while Rodrigo lead the line up front. Spain saw a lot of first-half possession, but were susceptible to Tunisia’s quick breaks when their own high press was beaten. Their opposition sat deep and shots on target were not forthcoming.

As La Roja return to the field of play for the second half, Nacho was deployed at right back, with Lucas Vazquez slotting in ahead of the Real Madrid defender. Koke replaced Thiago in midfield and Rodrigo was then replaced by Diego Costa slightly later at the hour mark. Nacho’s introduction gave a more solid defensive presence at full back, freeing Lucas to be more of a natural winger in comparison to how David Silva and Isco roamed infield without much luck in the opening 45 minutes.

Koke, who led the press for Spain against Switzerland, promised to provide more ballast in central midfield after a first half that left Busquets a little under-protected. Tunisia had managed to race away on the break with regularity, with any loose touches from Lopetegui’s side pounced upon. It provided a warning for Spain, knowing full well that explosive figures such as Gonçalo Guedes await them during their inaugural group match in Russia.

Rodrigo struggled against Tunisia’s low block with Diego Costa’s introduction providing a much more physical presence to play off. When the opening goal was still not forthcoming, Lopetegui showed another option available to him, replacing Jordi Alba with Iago Aspas and switching to a three-man defence, highlighting why players such as Nacho, Nacho Monreal and Cesar Azpilicueta were trusted ahead of the likes of Marcos Alonso and Sergi Roberto.

Iago Aspas was given the freedom to associate with Costa up top, having previously been deployed to little effect on the right-hand side of a front three versus Switzerland in Vila-real, and a low finish from the Celta Vigo forward made the difference in a 1-0 win. By giving their lone striker some support against a deep opposition defence, La Roja could be a little more direct and pack a punch after the amount of stale possession the crowd had endured for long periods. Switching their overall shape is definitely a feasible way to force the issue.

Ahead of Friday’s opening game against Portugal, Lopetegui will have to decide on whether his Plan A or B will stand up to scrutiny in more convincing fashion against an opponent that will want to show that they shouldn’t be written off so soon after their Euro 2016 triumph.

Nacho could be a more conservative pick at right back to guard against counter attacks, with Koke helping to lead the press in a midfield that can’t afford to leak or see their high press become uncoordinated against a more clinical attacking force. The statistics suggest that Iago Aspas should be trusted in attack, but Diego Costa provides the right kind of physical presence against Portuguese central defenders that won’t be afraid to get tight and make life difficult.

A three-man defence won’t be the go-to option for La Roja, but it is clear that with the defensive options that they head to Russia with, they have a very flexible range of personnel to piece together in behind Busquets and being able to play off a striking partnership might be a more reliable way to create chances against stubborn, reserved defences.

A whole host of players have shown over the last week that they are in good form and can play a role on world football’s biggest stage, which is certainly not a negative, with the end of their preparation now leaving Lopetegui to piece together the information he has collated to ensure that Spain don’t find themselves immediately on the back foot when the referee calls full time against Portugal. Throwing caution to the wind looks unlikely, with there still plenty of ground to be made up even if Lopetegui’s side can’t kick off in Russia with three points.