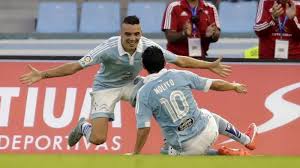 The Impressive Return of Iago Aspas

One of the most interesting factors about La Liga football is that it often sees players who cost very little quickly transform into known, recognizable stars. One player who has had to find redemption back in Spain is ex-Liverpool man, Iago Aspas.

The Spaniard was known more for his ludicrous short corner in the famous Liverpool-Chelsea tie where the Reds lost the league title at home essentially. Now, though? He’s one of the most impressive performers in a talented Celta Vigo side that is making a name for itself both in European competition and domestically.

The Spaniard has really shown that his qualities weren’t a myth, merely misused on Merseyside. Unable to get into the team that contained Luis Suarez and Daniel Sturridge, Aspas headed back to Vigo where he could show his best football once again. He looks happy and secure in front of goal and, as part of the side that Eduardo Berizzo has put together, is thriving as one of the premium forwards in the Spanish league at present.

Having expected to struggle this year following the loss of talismanic forward Nolito, Vigo have pushed on even further. Aspas has 10 league goals already this season, the same as Cristiano Ronaldo, having scored in seven different matches to reach that double-figure tally. Indeed, he’s scoring for every 3.8 shots which is one of the most clinical in the league. He’s found his shooting boots again in some style, and is helping Celta to really impressive everyone in the league this season with a glut of swashbuckling performances.

Indeed, he’s also created 29 chances for teammates, showing that he’s more than just a poacher or a scorer with no output at the other end. His impressive run of form in recent weeks is even leading people to discuss a potential call-up to the national side. On current form, he’s more than a viable alternative given the relative paucity of Spanish striking talent that’s doing the business on the pitch.

While he’s hardly on the same level as someone like a Ronaldo, Aspas is beginning to get himself into a position whereby his quality – so derided at Liverpool – can no longer be doubted or derided. Say it quietly, but if he was given more of a chance at Anfield he might just have scored the goals needed to get over the line that season.