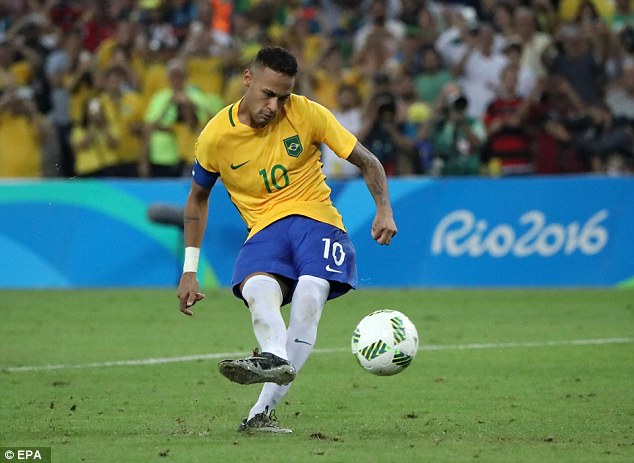 The multi-millionaire super star of the Brazilian Olympic and national team scored the decisive spot kick and the first goal in the scintillating 1-1 draw with Germany.

The Barcelona forward was in floods of tears after the final penalty kick made Brazil 5-4 spot kick winners.

‘This is one of the best things that has happened in my life,’ Neymar said. That’s it.’

He was helped to his feet several times, but each time slumped back to the turf.

The 24-year-old forward was the star of the night with an exquisite free kick which he turned over the German wall and into the net, leaving the keeper Timo Horn helpless.

It was a sweet moment for Neymar, who is the most recognizable football face in Brazil.

The moment of victory in front of 80,000 spectators was also sweeter personally for the number 10.

Two years ago he was among the Brazilian team humiliated by Germany in the same stadium by 1-7 — although he had to sit out the match with an injury.

It was a major embarrassment for the national side with the World Cup being held on home soil.

But Neymar, the captain of the Olympic team, was all smiles as he led his team out for the gold medal celebration.

His goal had been cancelled out by Max Meyer and the game went to a penalty shoot out.

Brazil had been consistent also rans in the Olympic football competition, despite being a soccer mad nation, since it began in 1964.

They had taken silver three times and bronze twice before.

It was no surprise that the Maracanã was packed for the final as Brazil finally celebrated the gold the nation had expected for so long.