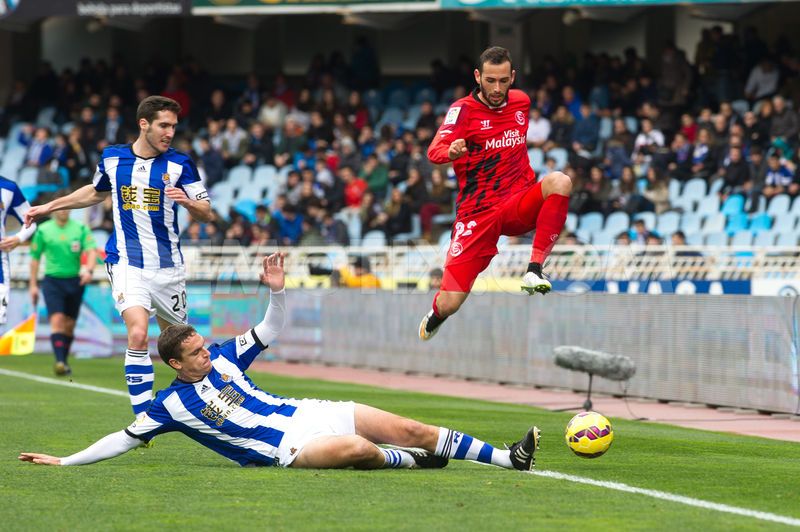 This weekend, two of the ‘other’ big clubs in Spain lock horns. With Sevilla now well out of the title race and Sociedad still looking at potentially making up the seven-point gap to 4th, a win at the Roman Sanchez Pizjuan makes that more likely. Sevilla themselves have lost much of the form that made them such an attractive team to watch before Christmas: they look laboured, and many problems exist.

Coach Jorge Sampaoli is desperate to leave and take up the coaching position with the Argentina national team, his home country. Sevilla are looking for major compensation, though, and are furious that the coach has lost his focus when the season had promised so much. Sociedad, meanwhile, turn up in some decent form themselves with three straight wins in the league. With better performers across the season arguably, too, there is nothing to say that a more consistent Sociedad side cannot take something from a wounded animal.

While the likes of Pablo Sarabia, Vicente Iborra and Franco Vasquez have had decent seasons, it would be a challenge to say the same of other players – at least, not throughout the whole season. Players such as Nico Pareja, Adil Rami, Gabi Mercado, Stefan Jovetic and even Vitolo have all disappointed – at least, given the quality they can show. Good games here, poor games there: it’s been a frustrating year for Sevilla fans.

Sociedad meanwhile have seen good performances from the likes of Carlos Vela, Willian Jose, Juanmi and especially the reborn Asier Illaramendi. Add in other solid performers such as Xabi Prieto, Yuri and Carlos Martinez and it’s easy to see why they have enjoyed such a wonderful campaign – relative to the expectation.

However, one thing makes it hard to see this as an easy gam for the away side: Sevilla at home are still strong. They lack the dynamism and the madness of previous months, but they have not lost at home since November 2016. Their shocking away form has been the major issue for them, with a massive tail-off away from their home ground being the primary cause for concern.

Sociedad have won four of their last five, with the one blip stopping a wonderful running phase. With their sole loss being a 3-2 reverse at Barcelona, they should arrive here feeling bold and aggressive. We’re backing a score draw, with neither side having any reason to believe it should be anything other than a fantastic game of football.