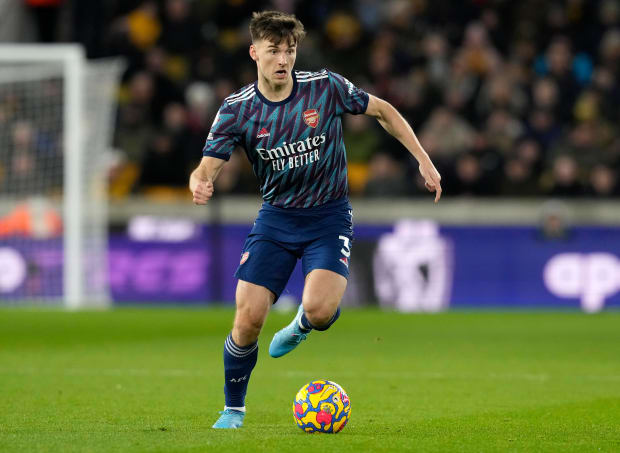 It will be an end of an era in the summer of 2022 for Real Madrid. Los Blancos are preparing for a change in the squad in a major way, with key arrivals such as Kylian Mbappe expected to arrive in the Spanish capital. However, it will also be a time for major exits. One name being almost certain to move on is Marcelo. The Brazilian has been a key part of Real Madrid since the mid-2000s, and now looks set to move on. Having fallen out of form and favour for much of the last couple of years, it looks like Madrid will finally move on from their legendary left-back.

Though Marcelo will likely return to Brazil to play for boyhood club Fluminense, Madrid will be looking for a young, in-prime replacement. Interestingly, one name being heavily watched to fill the squad spot is that of Kieran Tierney. The Scot is being closely linked with an exit from Arsenal, especially if they yet again miss out on the UEFA Champions League.

Reports suggest that while Tierney is happy in London, a failure to play in the UCL and to compete for honours might force him to consider his long-term term future. He is a long-term deal in North London but, as has been shown before, Arsenal do not stand in the way of their players when they wish to leave the club for pastures new.

It would be some move for the youngster who started playing for boyhood club Glasgow Celtic. Once set to be released by the Bhoys, Tierney soon emerged as a key player and was a critical cog in the Celtic side that won two trebles on the spin. Though he eventually left, it was never expected that Arsenal would be his final destination.

What could Kieran Tierney bring to Real Madrid?

Energetic and hard as nails, Tierney would offer a player who can both be committed in defence and capable going forward. Though never as good as the Brazilian he would replace in terms of offensive output, Tierney offers a steady stream of assists from his fine crossing and passing. New forward like Mbappe, should he sign, would surely thrive on the elite service that Tierney can produce.

His defensive output and overall ability to play both as a left-back, centre-back, and left wing-back would make him a key asset for Madrid. Seen as a target due to his excellent age, meaning Madrid could rely upon him for years, Tierney would be one of the few players heading to Madrid this summer who would cost a fee.

Like Paris Saint-Germain before them in 2021, Madrid look set to use a busy free agency market to fill out their roster with stars paying only wages to land them. What looks to be a highly interesting signing, then, could take place in the coming future as Madrid look set to rebuild their squad and reduce the age profile of the team.