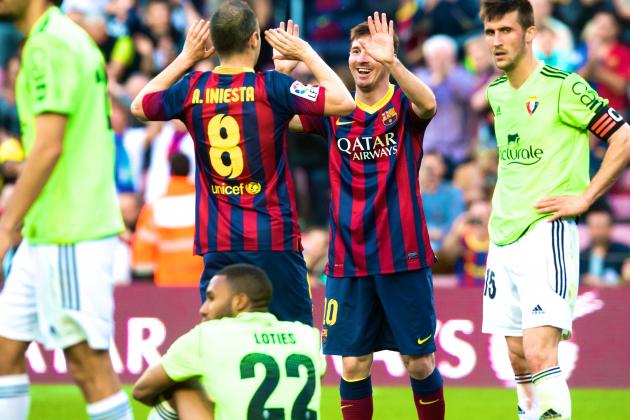 Barcelona have been struggling in recent weeks to keep the pressure on at the top, while Osasuna have lost their last four matches in the league on the spin. For two clubs that prided themselves on defence and attack, then, it’s ironic to see both struggling in this regard. However, for the away side, this should be a valuable chance to rebuild some momentum. Having scored at least two goals in their last 10 matches with Osasuna, Barcelona arrive here knowing that they likely have the firepower to blow the side away – with historical precedent backing that potential.

However, Barcelona have a habit of drawing at the moments, with three in a row, which could hamper their chances of getting a result in Pamplona. Osasuna come into the game with a strong squad, with the majority of their team fit after a period of bad injuries throughout the squad. The person who they are likely to turn for firepower on the night is to be Oriol Riera, likely to be deployed as a lone forward.

It’s likely that Goran Causic will come in as well, giving the team a bit more solidity and function in the midfield. To defeat Barcelona, they are going to need to be stodgy and tough to break down especially against a side that has so much firepower yet can appear somewhat brittle at times.

Barcelona arrive knowing that they have a fitter squad, with just Jeremy Mathieu and Neymar missing for this match. Iniesta is likely to start again, having featured in the midweek European match, and Samuel Umtiti is likely to return to the team. Gerard Pique is back, too, following ankle trouble, which should give the team a bit more solidity at the back in general.

In midfield, we expect to see Arda Turan continue after his excellent performance in midweek when he scored a beautiful hat-trick. He should deputize for the injured Neymar wide-left, where he can be so effective.

We also expect to see goals in this one. Barcelona have been drawing a lot but still look good going forward, whereas Osasuna really need Barcelona to fail to turn up to get anything from this match. This creates an interesting dynamic, and one that we expect could create a mild attack v defence style of match.

We’ll go for 3-1 Barcelona, with Suarez opening the scoring for the Catalans.