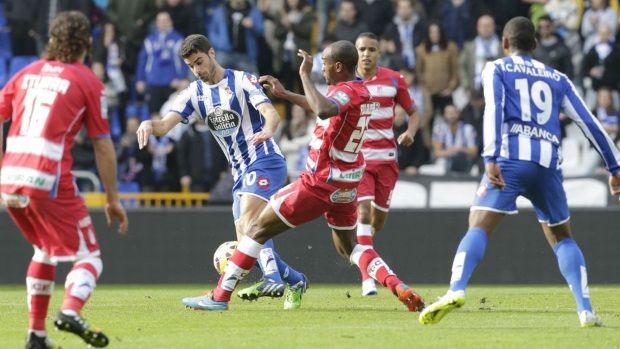 Not every match is a glamorous and exciting affair – and that will likely be the case when Grenada and Deportivo la Coruna take the field against each other. With important players missing for both sides, including Gaston Silva and Raul Albentosa, it’s going to be interesting to see how both clubs play this one.

Going into the game, we expect to see a change from the home side. Although the three-man defence was a major catalyst in a good performance against Barcelona, it’s not a natural system for Granada. At home we expect them to take the more proactive approach of going with four at the back once again.

It’s likely that Ruben Vezo will continue in defence alongside David Lomban. In midfield, we expect that Artem Kravets will return to the side in a bid to find a bit more spark. Kravets is a player we have a lot of time for, and is a welcome addition to the team once again. However, he’s not been in the best of form so far this season so it will be interesting to see how the midfielder gets it together for an important match at home.

The home side are rock bottom of the league with just a solitary point in their last six games. Depor are not much better, meanwhile, with a single win and a draw in that same timeframe. They sit 17th and come into the game knowing they need to start getting points.

It’s likely that former Benfica man Sidnei will be in defence alongside Alejandro Arribas. Luisinho will come in on the left, most likely, covering the excellent Marlos Moreno.

We’re going to go for an away win here. Granada have a pitiful two goals in five games, with both goals being consolation in 3-1 and 7-1 defeats. They aren’t in good form, confidence is shot and the squad is all over the place. As one of the Pozzo families’ other clubs, Granada look in need of some pretty drastic surgery. At present, they don’t look capable of maintaining their top-flight status.

Meanwhile, Depor aren’t much better. They look mediocre on the ball and disjointed off it. Depor haven’t won in five away games but if they are going to do it, they are going to have to do it this weekend. If they don’t then its’ likely they’ll struggle to all season!

2-1 Depor, with plenty of nerves. Not one that we expect to be much fun for neutrals but a game of massive importance to both clubs. Lose and we reckon Granada might be in pretty serious trouble this season.