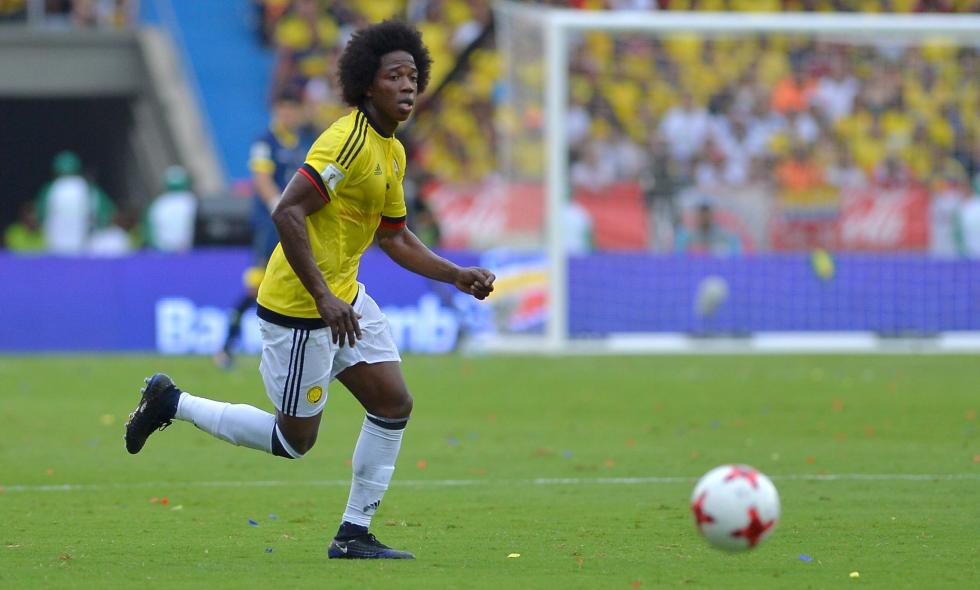 Espanyol’s Carlos Sanchez is a key player for Colombia

Recent results in continental tournaments would seem to confirm the status of La Liga as the world’s strongest competition. Given its pedigree, and the cultural ties involved, it is hardly surprising that La Liga plays host to some of the leading South Americans. Indeed, the importance of the Spanish game to South American national teams will surely be made clear on Monday when the provisional 35-men World Cup squads have to be handed in.

Argentina, of course, have Lionel Messi, as well as key midfielder Ever Banega of Sevilla. Brazil have a quartet divided between the big two: left-back Marcelo and holding midfielder Casemiro are with Real Madrid, while midfielder Paulinho and Phillippe Coutinho line up with Messi at Barcelona.

The biggest names in the Uruguay team make their living in La Liga: Luis Suarez at Barcelona, and the Atletico Madrid centre back partnership of Diego Godin and Jose Maria Gimenez. There is also midfielder Federico Valverde of Deportivo La Coruna, on loan from Real Madrid. And the two reserve strikers also play in Spain: Cristian Stuani at Girona and Maxi Gomez at Celta Vigo.

La Liga has this season also been the home of one of the most important names in the Colombia side – but not one that would spring to the mind of many who do not keep a close eye on their national team.

It is not giant centre back Yerry Mina of Barcelona, though he is sure to be called up. Neither is it one of the strikers, Carlos Bacca of Villareal or Luis Muriel of Sevilla, who are probably competing for one place in the final squad of 23. Nor is it the versatility man from Levante, Jefferson Lerma, though he may well be handed a place in the squad.

One of the first names on the team sheet of Colombia coach Jose Pekerman is that of Carlos Sanchez, once of Aston Villa, subsequently of Fiorentina and this year loaned to Espanyol.

Sanchez is by no means a glamour player. He is an out-and-out defensive midfielder, a man who interprets his task as protecting the defence by covering space, winning his tackles and handing the ball to more creative colleagues. His club career has been solid rather than distinguished. But he is one of those players who takes on an extra importance when he represents his national team.

A striking detail is that he has never played club football in Colombia. He developed through the youth ranks in Uruguay, before later having spells in France, England and Italy as well as Spain, where he spent a season with Elche in addition to his current time with Espanyol. Few are likely to remember his for his exploits in club football. But it is hard to imagine a Colombia side without him.

First choice for over a decade, only four players have made more appearances for Colombia than Sanchez. His 84 caps have not produced a single goal. But that it not his task. Colombia look to him to balance out the midfield, to use his positional sense and his timing in the tackle to cut out the danger and win back the ball.

He has produced two of the finest man-marking performances that I have ever been in the stadium to see. In the 2015 Copa America in Argentina he got the better of Messi, on home ground, in a magnificent duel. After the match both coaches paid tribute to the contest, and agreed that Sanchez came out on top. That game finished goalless.

Four years later in the Copa America, Colombia beat Brazil by the only goal. And the platform for their win was a superb marking job performed by Sanchez on Neymar. It remains the only time that Neymar has been on the losing side in a competitive game for Brazil at senior level, and he became so wound up that he manhandled the referee after the final whistle and picked up a four-game suspension. But he could not have been complaining about rough treatment. Just as against Messi, Sanchez was fair but relentless. His success in the duel drove Neymar to levels of frustration that he could not control.

Colombia trust that, at the age of 32, Sanchez is still capable of that level of performance in Russia. He will not be La Liga’s most glamorous representative in the 2018 World Cup. But he could be one of the most important.