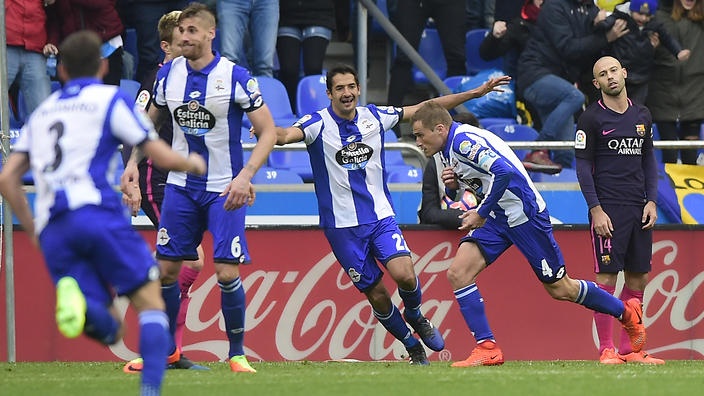 After what must go down as one of the most epic games of football of all-time in midweek, FC Barcelona are back to the relative simplicity of the league. The equation is simple; win, and keep winning, and catching Madrid is not beyond the realms of possibility for an unlikely La Liga crown.

If they are going to win the league, though, they will need to win games like this. Deportivo are a good shout to go down this season, mired in 17th place at the present. Barcelona currently top the league, a point ahead of their rivals from the capital albeit with an extra game played.

Deportivo are fruitless, with just one win in their last six. Barcelona have won six out of six, for reference.

Deportivo are expected to miss out on their most reliable player in Florin Andone, as well as Pedro Mosquera. With both missing out through suspensions after accumulative bookings, Joselu is likely to make a start up front for the Galician outfit. Alex Bergantinos might make the same kind of rare start in the midfield, too, should Guilherme miss out once again.

Sidnei might miss out, too, which is a big loss for the home side. Alejandro Arribas is expected to come into the side, which only increases the chances of an away win. Deportivo are used to conceding goals, too, and their home ties are usually very exciting; with 2.5 gaols on average in each of their last 5 games against Barcelona. Despite being quite used to getting beat about the place, though, Deportivo are especially used to losing to Barcelona; they have won their last five trips to the Riazor.

Barcelona are on an incredible 19-match unbeaten run in the league, too, so they arrive at this match in some rather imperious form. The chances of a home win, or even a draw, are pretty slim in all honesty.

Pepe Mel is a great coach and should do well at Depor – but it may not be until next season. They got a great draw with Atletico Madrid recently, and also drew against Real Betis while winning 1-0 away at Sporting Gijon. 5 points in 3 games is a fine return for Mel, but we expect that he might taste defeat here.

Barcelona are flying and the Champions League continuation should reinvigorate them even further. 4-2 Barcelona is our optimistic scoreline prediction for what should be an exciting if somewhat predicable game of La Liga football. It certainly won’t be as exciting as midweek, put it that way!