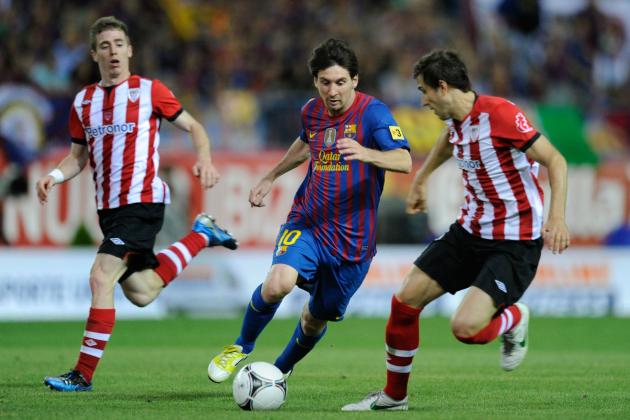 As one of the truly classic La Liga fixtures, Barcelona playing host to Athletic always catches the attention. This year, it’s got a truly special feel to it. With Barcelona in second, gunning for the title, Athletic arrive in town in a cool 7th place, well capable of making a jump up the table as the season progresses. With Sevilla losing last weekend, Barcelona know that they are potentially the last team standing to be able to catch Real Madrid at the top of the table.

A win at home against an old, but respected, opponent would go some way to making that a more likely eventuality. Barcelona are on a decent unbeaten stretch, and won a dramatic 2-1 victory at the Vicente Calderon, following goals from Suarez and Messi. Bilbao are already out of the cup, and thus sat out a midweek game; this should be enough to give them enough energy to compete.

However, few teams arrive at the Nou Camp with anything like hope or expectation. If they are to take something here, it will be one of the most heroic performances put on in the league in a long time.

Barcelona are on a 13-match unbeaten run, and score goals aplenty at home with 3+ goals in each of their last 3 home matches. This consistency in front of goal should help to break down a Bilbao side that are beginning to look a little leggy defensively.

With both Sergio Busquets and Andres Iniesta back in the side, the Catalans can turn to their midfield knowing they have the nous and the knowhow to handle just about any match. While Benat is likely to return to the opposition midfield, it’s not enough to combat the return of this dynamic duo. Expect Barcelona, as ever, to dominate the midfield.

Instead, there is chat that both of the Barca midfielders might side this one out, at least from the start, with Ivan Rakitic and Arda Turan covering. Both have impressed in the centre of the park, and would go some way to offering the side a little extra ‘jazz’ where it was missing previously.

Frenchman Samuel Umtiti is likely to come back in to the back ahead of Mascherano, while Denis Suarez will probably play in attack again after some good recent performances. Having failed to live up to his immense potential in Barcelona so far, it’s a chance for the youngster to impress in a big, high-pressure match.

For Athletic, the return of the brilliant Aymeric Laporte should make all the difference. They are a different side with him around, offering a coolness at the back you would expect of a veteran.

Even with the young star back, we expect a solid Barcelona win. They are steamrollering sides at the moment and, as good as Athletic are, it would be a surprise to see it end now. A solid win for the home side, with 2 goals to spare.